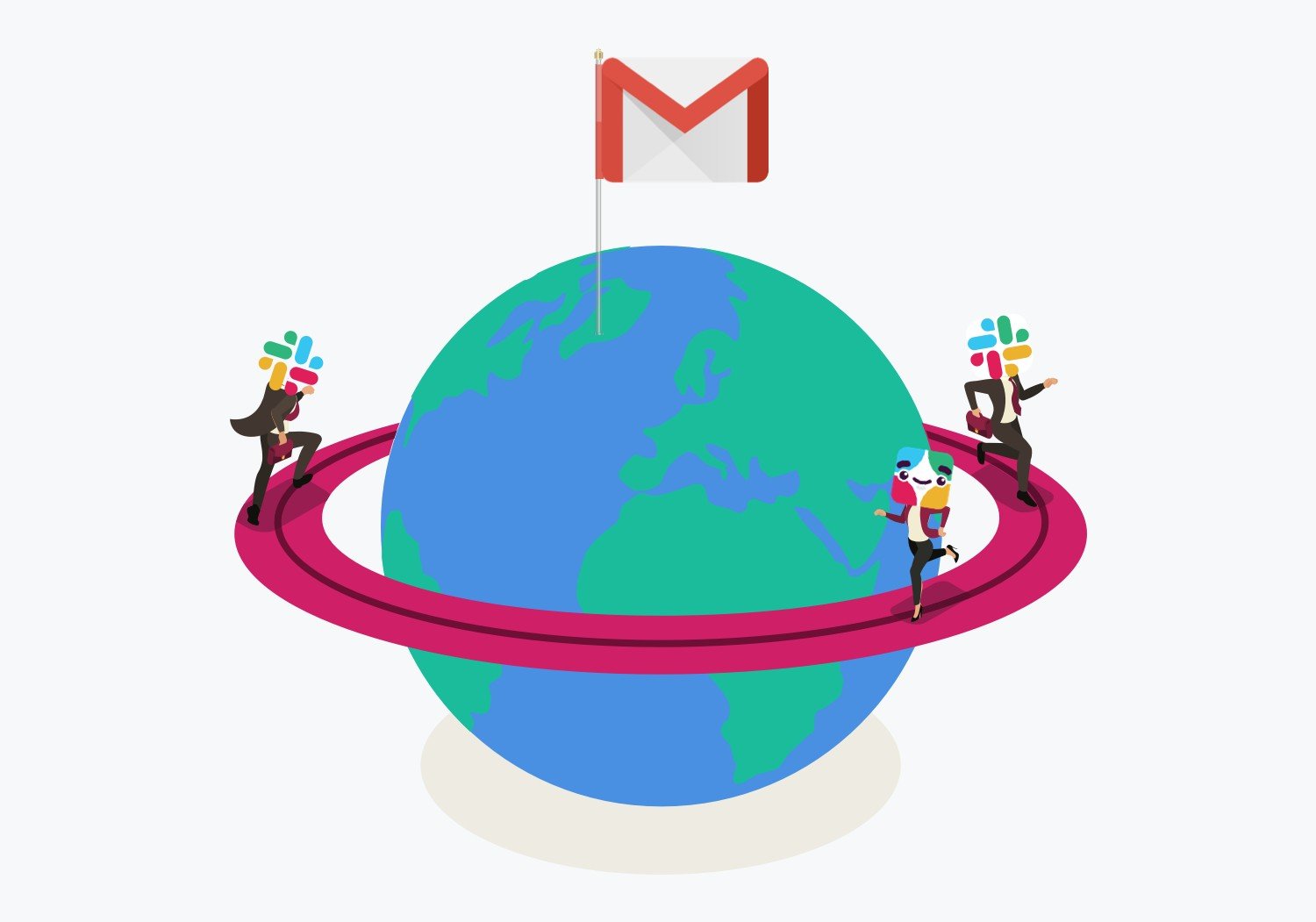 Most of us don’t think Slack vs Gmail because we use them interchangeably for short-term and long-term communication respectively; however Slack doesn’t see it that way.Slack has been dominating the workplace productivity and communication space for a few years and is only expected to grow. Dubbed an ‘email-killer,’ ‘office social media,’ and a dozen other things, Slack is transforming the way modern offices work. And it’s not slowing down. In 2016, it was valued at $3.8 billion. In 2019, it was valued at $15 billion although it has hit a recent snag in today's volatile market.

For all that Slack has successfully enhanced workplace productivity, it’s also destroyed workplace productivity, according to some folks. It’s the digital version of an open-office plan that in theory creates more opportunities for collaboration, but in reality, it has massive unintended consequences. Instead of replacing email, which is platform- and organization-agnostic, Slack has introduced a new layer of communication that has power users sending up to 1,000 messages a day. And while information is archived and searchable (if you’re paying for the premium version), it also piles up quickly. If you don’t know what you’re looking for, you likely won’t find it.

The result is that users have more sources of information than ever before. All the old ones, like email and Dropbox, are still used, along with the communication tools on those individual platforms. But now on top of those is a whole additional, very thick layer of messaging about those files and platforms. Synchronizing it all is more of a nightmarish task than ever before.

That’s why Gmail is not only not going to be killed by Slack, but will continue to coexist alongside Slack for the foreseeable future (and to Slack’s dismay). The question is: how?

Until Slack came into the picture, email was considered the most efficient way to get an immediate response from other people. When Slack picked up steam, ‘Slack-ing’ colleagues became the fastest method for instant replies—which reset email response expectations from near real-time to 24-48 hours.

As Slack evolved, it introduced new features designed to wean users off email completely, making it a competition between Slack vs Gmail. But despite Slack’s best efforts, there are good reasons to use both solutions in the workplace. Think about it—when was the last time you closed down Gmail to work solely in Slack or vice versa? Likely never. Most people live and work in both solutions all day long. They’re both vital pathways in our daily work’s central nervous system. Furthermore, many of us have both tools installed on our phone to stay on top of communications round the clock, which neutralizes the need for a Slack vs Gmail conversation.

Google has made Gmail a hub for work productivity. Mostly, that’s because Gmail is no longer just email, it’s a key part of the larger Google ecosystem: Calendar, Drive, Docs, Sheets, Tasks, Hangouts, and on the list goes. When you communicate via email, you’re able to easily integrate virtually any other task you could need to access. Plus, email is asynchronous and long-form, which means you’re able to better digest information and respond thoughtfully—all in a thread that keeps conversations, contacts, and attachments in one place. For many, email is a system of record with years of saved messages and documents. Over the years, email clients have morphed into our storage drives for reference and vital paper trail moments.

On the other hand, when you tap into all the features Slack has introduced, it can be an incredibly valuable platform. For example, it’s become the default to Slack yourself quick messages you don’t want to forget, instead of writing a note. More notably, one of the main attractions is Slack’s app directory. Its deep bench of productivity bots and tools are designed to automate work tasks and connect data sources. A real-world use case: web visitors enter their email into a form, which populates a CRM while simultaneously Slacking an alert to sales and marketing, notifying them that a lead signed up for a free trial. It reduces lead follow-up time from hours to seconds.

Gmail and Slack aren’t without their shortfalls, though. It’s the search functionality that leaves much to be desired, for one. Threads are organized by the contacts copied on them, not by the topics they focus on. Attachments can easily get lost. And if files or conversations exist outside the Google ecosystem, they won’t show up in your Gmail environment.

Recognizing the flaws, Gmail, and Slack have advanced search modifiers to help users find the information they need quickly. For aspirational power users here is a list of lesser-known modifiers.

Admittedly, in the moment, it’s hard to remember to use modifiers, let alone memorize the right shortcut.

For the majority of us, communication and collaboration happen instinctively, but organizing is an afterthought. How much more productive would you be with Gmail and Slack if files were easy to find and appeared at your fingertips the moment you needed them? What would you do if you could get ten more bonus hours every week? That's where Digitile comes in.

Digitile is a simple, easy-to-use universal file search engine that restores order to your chaos, delivering all your files you’re looking for in less than 15 seconds—no matter where they’re stored—without having to leave the tools you’re already working with: Gmail, Google Drive, Slack and Dropbox. Digitile addresses the shortfalls of Gmail and Slack while embracing its strengths to make the way forward more comfortable and workable.

Curious about using Digitile in your Gmail instance? Try it free, or explore more information today.

Try Digitile With Your Team For Free

How to Structure Google Drive to Maximize Your Creative Process
September 26, 2019

Try Digitile With Your Team For Free